Throughout this residency during research, I had seen her in several forms. One example is the major storm that Winnipeg had pass during the Wood Land School. She was very powerful that evening, that had spawned a Tornado.  The Thunderbird also appeared symbolically in several forms, such as seeing a Red Thunderbird convertible, a beauty for sure;  A subliminal message indicating that the time was right to create her spirit.
In addition, there were many readings that had appeared on several Facebook pages and I even bumped into a female friend whose namesake is Thunderbird woman as well.  It would seem that the timing was right for the creation of the dress and many outside influences assisted me to create and sew one for her.

I was honoured to be selected by two wonderful curators and staff of Plug In Institute for this residency. I felt very welcomed and I would like to graciously thank all participants in this endeavour and am hoping many more will come into fruition that will assist all artists to pursue further their creative spirit.

Jamie Black
Lean To is a durational performance produced by Jaime Black while in residence at Plug In Institute of Contemporary art for the Wood Land School: Thunderbird Woman, facilitated by Duane Linklater and Jaimie Isaac. The performance will take place in the context of the Wood Land School Open Studios and Wrap Party on the Plug In Institute of Contemporary art Rooftop.
Building on her recent photo series, Conversations with the Land, Black invites viewers to imagine the possibilities for decolonizing institutional spaces through the incorporation of land-based practices. Lean To centres on themes of cultural memory, focusing on the power of community, connection, and ceremony to foster resilience.


Lindsey Bond is presenting in-progress work inspired by Daphne Odjig's Thunderbird Woman titled Bridge Meditations: following women and birds across rail bridges in Winnipeg.  The photographic and video work created during Wood Land School, follows the movement of women and birds across bridges opening up a conversation about de-colonization, safe and sacred spaces and re-contextualizes daily movement. Lindsey is also investigating walking as a methodology that begins to access and question her experience of the land.

Lindsey Bond's lens-based work explores socio-geographic issues in Canada. As a third generation Canadian, she creates pervasive imagery through a settler lens, exposing our need to reconnect with the ground we live on. Bond works with a photo-documentary ethic as a lift-off point to create street level photographic and postcard installations, books and video. Bond’s practice has begun to focus on collaborations and alliances between indigenous and settler communities to further investigate Canadian perception of space, memory and identity. Current projects include: investigating the shifting ground surrounding defunct rail-lines in Manitoba, and the bridge as a metaphor for personal transformation. Lindsey received her BFA in Photography from Emily Carr University of Art + Design and studied Visual Communications in Edinburgh, Scotland. Bond’s work has been exhibited across Canada including: Gallery 44; offsite installation on King and Spadina, Toronto; Latitude 53 Contemporary Visual Culture; public transit installation in the Edmonton LRT, Harcourt House Arts Centre and The Richmond International Film + Media Arts Festival.

Kristin Flattery and Danielle Fenn collaborated to produce new work for the Wood Land School residency. Both women are of First Nation and European ancestry and strive to explore their integral history and identity that was denied to them growing up.

Fenn has a piece of artwork in the Manitoba Governments Permanent Collection dealing with her Cree and Scottish bloodlines. Fenn’s work focuses on reinserting personal voice into institutional narratives and the concept of emotional labor. Much of Flattery’s work involves issues involving missing and murdered indigenous women and girls as well as politics about pollution resource extraction and exploitation. Flattery’s art has been featured on large wall murals at the University of Manitoba’s campus and featured in Red Rising magazine. Fenn and Flattery felt these issues would be a firm starting point for developing a concept as they are both frustrated with the industrial medical complex and how the Canadian government has failed to properly honour the treaties or issue an inquiry for missing and murdered Indigenous women and girls. For First Nation peoples, treaties have always been about creating relationships of balance and harmony where as the government looks at our treaties strictly as land claims and economical mechanisms for producing monetary gain.

For the Wood Land School residency Fenn and Flattery traveled to this specific site to perform a healing ceremony and examine a traditional Indigenous harvesting migratory route that has been disrupted due to construction of a man made dam. Flattery and Fenn felt it was profoundly necessary to document this once abundant resource through photographic imagery and video. Through studying ancestral migratory route the artists learned there was more then just wild rice that was gathered at this location, but blueberries, raspberries, birch bark, wicai, and other medicinal plants as well. Eagles use to flock in abundance but due to mercury contamination this sadly is no longer the case. The artists documented the land and water as well as staged a performance of peaceful rebellion. The injustices of what humans are doing to the land can be closely related to the injustices of how we treat our women. Flattery and Fenn also carried with them a HBC blanket Fenn had beaded with trinkets in honour of the women coerced into the sex slave trade across the great lakes. Fenn herself has been victimized through sexual violence and the act of learning to smudge and bless the blanket was a poignant metaphor for her own trauma.

When installing “Sisterhood, Blood Memories, and our Relationships to the Land and Water,” we couldn’t help but think about the Haudenosaunee’s Wampum belt and what this belt represents. The wampum belt portrayed the paths of two canoes traveling down the river leaving two equal trails. The white beads of the wampum signify peace while blue relates messages of a more serious or political matter. The wampum was used for official purposes as well as spiritual ceremonies and also as a way to bind peace through joining the League of Nations.

The relationship of this land and body of water has not been fully respected and therefore a relationship of tension has been the outcome. Due to this tension there has been a divide created between the Indigenous and non-Indigenous communities creating two unequal disrupted paths. Instead of the wampum’s calm blue and white hues the artists chose to split bright red fabric to represent the two disrupted paths that hung from unequal tree branches creating an Indigenous theater for our video of protest against the atrocities done to our land and water systems. The branches create an arrowhead to signify this ongoing and infinite issue. However, the artists do believe a positive outcome can one day be reached so the artists sat contently mending skirts in hopes to mend such relationships through their own personal labors.

Our land is scared, she is living, she is nurturing, however, if we don not do our part to care for her, all that is good and nurturing will be taken away from us. Reconciliation is a vital concept when exploring Indigenous content in art. However, it is a term some First Nation artists such as Robert Houle are suspect of for it is rooted in Christian’s concept of forgiveness. Robert Houle was about something more than forgiveness. To “let it go from the mind” is a self determining act, while forgiveness, is an act of submission. The question that Fenn and Flattery are aiming to explore in this new work is how to heal without falling into the submissive posture Houle is wary of. They believe the answer is in creating and performing non violent but potent and powerful work.

The Wood Land School was an incredible experience. We feel very blessed and honoured to have created such meaningful relationships with all our peers as well as our mentors Jaimie Isaac and Duane Linklater. We cannot thank the school enough for taking us on all these wonderful behind the scenes and sneak peak tours of important exhibits here in Winnipeg.

The installation; This isn't a Spill, It's Cut Grass, is a mental map of responses and investigations that I pursued in my time at the Wood Lands School, I wanted to recreate an in studio look of how I'd go about creating art, with notes and inspiration scrawled and tacked to the wall. I focused my effort on 3 primary topics to create work; Dionysus, The Bystander Effect and Why Die For Danzing.

My intention with Dionysus, the Greek god of wine and consumption was to inject an alternate mythology into the problem of alcohol dependency. I have seen several family members and myself turn to alcohol and other substances to cope with problems and had sought to undercut the tragedy of the situation by evoking the idea, that we were just praying to Dionysus. Positing empty promises that he could; 'heal the sick, cure the blind, Dionysus-Dionysus.' Hoping to engage a dialogue about this issue without being entirely transparent about it.

With The Bystander Effect and Why Die Danzing, I wanted to put these two concepts in proximity of the workshop and my own practice to expand on and create commentary between all the issues our talks approached. The Bystander Effect being a situation in which multiple people observe a crisis and due to the presence of other observers, personal responsibility becomes so diffused amongst the bystanders that no single person takes action. And 'Why Die for Danzing' was a French World War 2 anti war sentiment, that proposed appeasement over fighting for a territory owned by Poland. I had found the two sentiments indicative of how Indigenous issues are handled in North America. Proposing that perhaps responsibility is being diffused amongst everyone and then no one helps or they 'other' Indigenous people and make it not their problem.

This work was inspired by the conversations and shared experiences that occurred during the 3 weeks of Wood Land School.

Naturalis Historia (momento temporis) joins human and non-human imagery into one fabric that favors the interrelation of all present actors. The video plays pretention of universality and at the same time introduces aliments produced by modernity such as ethnographic film and encyclopedic knowledge. A ritualized consumption of such aliments is strangely celebrated, turning Naturalis Historia in an act of joyful anthropofagia.

The present installation portrays through the act of ritual consumption, the political remnants of modernism and the uprising of alternative modes of thinking. Weaving between anthropology, humanism and ecology, the installation discusses the free circulation and consumption of knowledge and emotionality promoted from the hegemonic cultures constitute a source of aliment in the subjected societies. Modernity and its remnants (either trans/post/alter) turn into food for who feels hunger.

In these works in progress, I was interested in transformative and haunting aspects of nature, sometimes suggesting environmental holocaust. I redrew birds after Audubon's nature paintings, removing them from his observational view of nature and re-configuring them in a swarm that references horror film; drew beached whales from Google searches; re-edited footage from a swim in Lake Winnipeg to reveal something unfamiliar appearing in the water; and filmed a lightning storm with an app that remaps time.


In Desire Lines, a site-specific dérive, I work with the raw, ephemeral aspects of experience by turning to the feral dogs of Sioux Valley Dakota Nation. Deep in the night, in a multipolar world, I drift alongside two wild animals — at once both involved and separate. 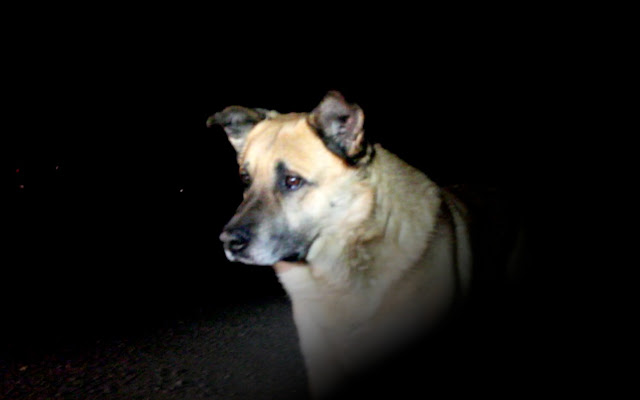 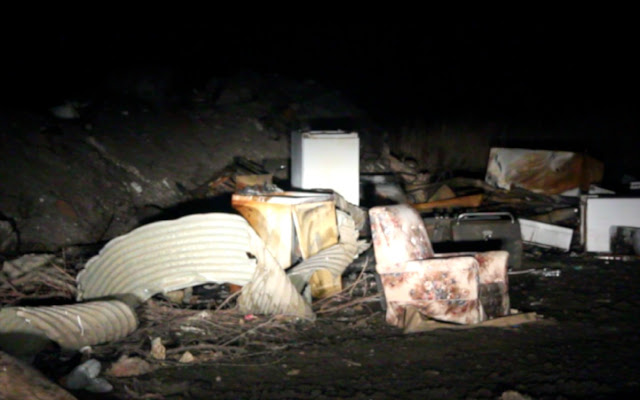 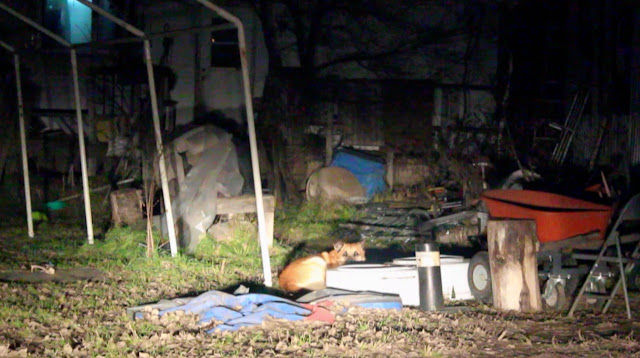 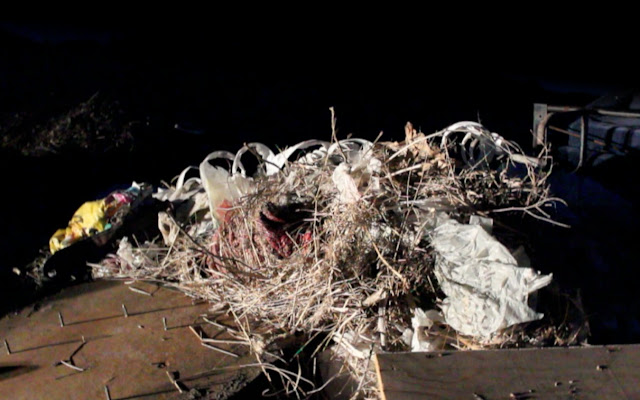 Posted by Pluginica at 3:16 PM